Idiot Dad of the Week 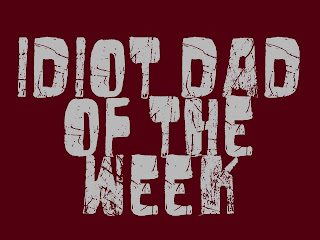 There are times when things just don't go as planned. More recently, that's happened a lot with our Idiot Dad of the Week. Dads are supposed to be there for their children. Dads are required to take care of their kids and make sure that nothing bad or harmful happens to them. Sometimes Dads are not as careful and don't think things through very well. It usually is not planned and happens without thinking of possible scenarios afterwards.

It's with this behavior our first Idiot Dad of the Week was awarded this prize..

Without further adieu we present Eric Bolton as Idiot Dad of the Week.

As per usual, it was bath time in Boltonshire. Eric usually bathes the children at night one at a time versus bathing three kids at once. He says it's to prevent bath time drama. He usually bathes Celi first, then Disco, and Ladybug is last.

Since Ladybug is older, she uses her mother's hair and body products. One such product her father had not been using is the AVON Strawberry Body Soap. Ladybug would keep reminding him after the bath saying it makes her smell "beautiful".

Eric remembered on this day.

Ladybug was excited as her dad put the soap on the washcloth. She wanted her father to smell the pleasant aroma and he did. Ladybug wanted to smell it next so her father held out his hand with the cloth and soap.

Here's what seals the award for this week.

As Ladybug goes down to smell the soap, Eric lifts his hand up to smear the soap on her nose and cheeks.

Ladybug INHALED the exact second it hit her nose

Ladybug laughed at first because she thought it was funny. But then her smile turned upside down and she started screaming BLOODY HELL MURDER!!!

Eric tried to get her to blow her nose because he thought it was irritating her nostrils.

He tried to dig the soap out with toilet paper.

She then asked for water, which Eric poured for her.

The soap went UP her nose and was now in the back of her throat.

She asks for a popsicle because her throat is burning. She remembers this treatment from when her tonsils were removed. Eric wraps her in a towel and carries her to the kitchen. Her mother asks what is going on and Eric tells her while expecting to be struck down where he stood.

Ladybug starts coughing and saliva and bubbles come out of her mouth. She eventually vomits A LOT and calms down. She takes her popsicle, gets dressed, lays on the couch and falls asleep.

She no doubt was thinking of how her Daddy violated her trust.

No word on if Eric still is responsible for bathing duties.

So congratulations Eric, you IDIOT!!!