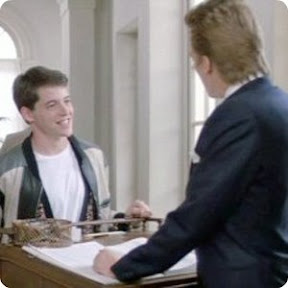 Because I couldn't get enough net traffic based on my part time job, Bryan which is the Flavor of the South, got in contact with me to review a couple of their products and sponsor a give away.

My Feedburner stats are sure to go up on this one.

The initial email from the public relations liaison suggested some recipe ideas for me which consisted of:

These along with other recipes can be found on their website at http://www.bryanfoods.com/.

While these seemed like good choices, I thought about my family and felt I needed to go with a more practical approach.

I cut the links in I don't know, half-inch pieces and browned them in a skillet. I also browned a cup and a half of white rice.

I added Seasoning Salt, Ground Comino, Garlic Salt, Salt and Pepper to the rice while browning. I couldn't tell you how much I used, because here in San Antonio and probably most of the South, we don't measure seasonings. We just pour, sprinkle, dash, sift however much we feel is correct.

When the browning of both parties were complete, I combined the two in a large skillet along with a can of drained whole corn, an 8oz. can of tomato sauce and 3 cups of a chicken broth water concoction.

I then mixed them all together and let it return to a slow rolling boil. Actually I don't know if it's called that, and it's not like it returned because it previously wasn't boiling. I just wanted to make it seem like I honestly know what I'm talking about. Once it starts boiling, reduce heat to "LO", cover, and let simmer for 25 minutes. The finished confection looks like this. 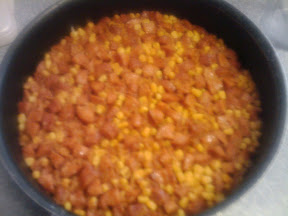 Thinking about it, this looks like a lot of Kibbles and Bits, I assure you it is not. We served on warm tortillas and enjoyed.

The kids enjoyed it. Even though Celi was sick, she ate what she could. Disco, who is in this phase of not wanting to eat, actually ate all of it. Ladybug just ate the sausage. Both KC and I though the sausage was good as well.

Afterwards I asked Disco if he likes the sausage, he told me yes. I then asked him what he would give it, he held up three fingers. I'm not sure what scale he was going off of, but let's assume it was out of five.

The one package would not have been enough to feed my family (6 eat, 1 nurses). Which is why I had to go the more practical route and make it into something that would garnish leftovers.

A couple days later, KC popped out the Bryan Beef Cocktail Smokies Smoked Sausage for the kids lunch. She opened the package and emptied the contents into a small pan. She then drowned the poor smokies in Hunts BETTER TASTING Original Barbecue Sauce.

She brought to a small bubbly boil and served along side with Macaroni and Broccoli. The result was this. 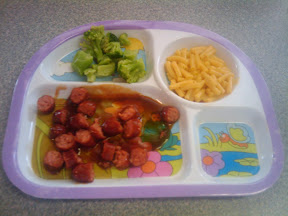 The kids REALLY enjoyed this one. They ate all their lunch. Again, we've had recent problems with them (except Celi) wanting to finish their food. But they finished this meal as well.

They all really liked them served this way and here are pictures to prove it. 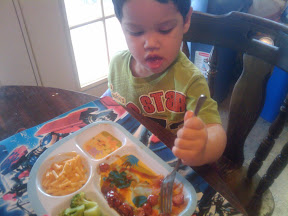 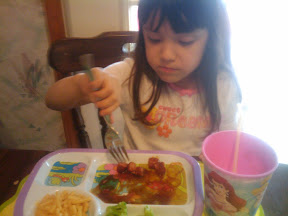 The Smokies are ideal for appetizers as well. But again, practicality is king when it comes to feeding my family.
Like I mentioned before, Bryan Foods.com has other ideas for you to try out that may be more suitable for the size of your family.
And now....
The GIVEAWAY!!!
Bryan Foods agreed to give away the same products I tried, a 16 oz package of Bryan Smoked Sausage Links and a package of Bryan Beef Cocktail Smokies Smoked Sausage. 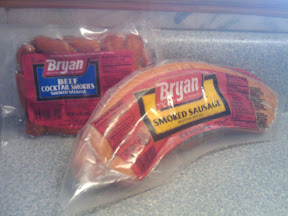 It may not seem like much, but it covered a couple of meals with my family and even gave us left overs in both cases.

There are a few ways to enter:
Required Entry: Leave a comment saying you want some sausage.
Additional Entries (each entry must be a unique comment):
-Subscribe to this blog in a reader and tell me you have
-Tweet this contest and leave a link to such tweet (Only one entry will count)
-Who is Abe Froman?
Sure it seems like a lot of rules for some sausage, but free food is free food. Who doesn't want a shot at free food??

Small Print
The winner will be selected randomly on Random.org. The contest will be over on Wednesday 31st at 6pm CST. The winner will be notified by email and have 48 hours to reply. If there the winner does not reply, then I will pick someone else. If they don't reply, I'll just probably declare my mother in law the winner.

Also, for all you newbies who are doing it for the contest and will unsubscribe once the contest is over;
I will be hosting another giveaway next Thursday and this time, the winner will get a YEARS SUPPLY of the product. And I'm not talking anything like Turtle Wax of WD40, which can last a lifetime on one container.