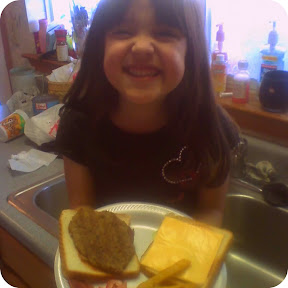 I had this idea for Valentine's Dinner. But on Valentine's day I got 2 and 6 numbers on the Super Mega Bonus Lotto and plans kind of changed.

Because I really wanted to include my daughter in the process, KC suggested that we delay the dinner until Monday.

My idea was to make hamburgers that are in the shape of hearts.

If I had the time I would make the patties myself, but I've gotten real OCD when it comes to cooking recently. So I felt it would be best if I get the frozen patties and use a cookie cutter shaped like a heart for shaping the patties.

The only problem was that I couldn't find a heart shaped cookie cutter. Four stores and nothing. At the last store, I pulled a MacGyver and purchased a discounted Valentine candy box to use as the heart template.

I took the lid off and gave the rest of it to the kids. They played the monkey sounds over and over again. I do not know where the thing is currently. That means I'm going to walk through my house later tonight trying to be quiet and then get yelled at by recorded angry simian after stepping on it.

Ladybug helped me cut the burgers into the heart shapes. All the excess meat was smooshed together to form a little heart for Celi. 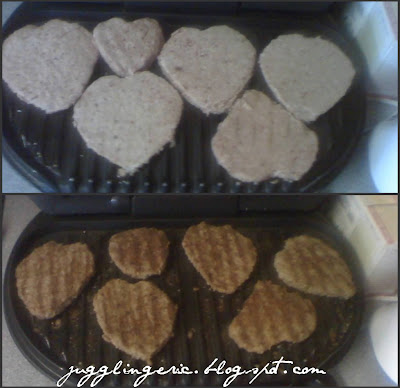 As you can see, they came out pretty good. They came out better than I expected anyways. I didn't think I could pull it off, so if they even remotely resembled a heart I took it as a win.

Everyone enjoyed the burgers except Disco. He's in that terrible two's stage where he just doesn't eat. I took it personally and put him in time out until bed time.

Even though we had it a day later, and it we didn't do anything more than cut the patties; I know that Ladybug enjoyed herself and will more than likely remember it for a while.

Do you have any traditions that you have with your children on Valentine's Day?

Have a great day my friends.
heart burgers valentines day