The Dork, The Hot Chick and Joe's Crab Shack 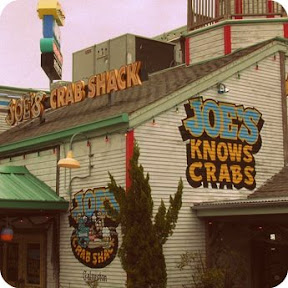 After leaving his sister's baby shower, a very nervous dork calls a very hot chick on his pre-paid cell phone and asks if she wants to go out to dinner.

He picks her up at her mother's house. He waits on the couch of the living room. He meets her mother who is watching Pay it Forward. Her mom is super nice and likes the nervous dork.

They go to Joe's Crab Shack and have a great time.

It's the hot chick's birthday, well actually the day before. Our dork is going out of town the next day to a buddy's wedding so this is as close as he can get.

He brings the hot chick to Joe's Crab Shack for the first time since their first date. Their waiter brings a bowl of whipped cream and offers to pay for their food if she can find the cherry before everyone is done singing Happy Birthday. The hot chick's face gets covered in whipped cream. Right before the song is over, someone runs up and informs that they forgot to put the cherry at the bottom.

Good times were had by all.

On the way home after work, the hot chick calls the dork and tells him that her son will not be going to his dad's that weekend because of his spelling bee competition on Saturday. The son will be going the next weekend instead.

The dork had an engagement ring that was burning a hole in his pocket closing on two weeks now. He was only going to pop the question if the son could be there too. The plan was supposed to be for the following weekend, which is now no good because her son will now be with his father.

The dork finds her in the party supply row, and asks her what the plans are for tomorrow evening.

She informs the dork that it is Grandpa Flores' birthday and everyone is getting together.

A year or so earlier, the hot chick had told the dork that she had a dream where he asked her to marry her in front of their families.

He asked her mom if they could have the party at Joe's Crab Shack. She said she could arrange it.

The dork now rushes to where the hot chick's father worked. A co-worker finds him and let's him know the dork is there to see him. The dork apologies for the time and the short notice, but explains that it is very important that his grandson be present at the event and he won't be available for three weeks and the dork can't wait that long.

He asks permission to marry his daughter and he gives his approval on the steps outside a school building at Cornerstone Christian School.

The dork tells him to be at Joe's Crab Shack at 5:30PM the next evening for the proposal.

The dork then calls his brothers and dad to please be there at 5:30PM.

He knows he told them 5:30PM because he said it half a dozen times.

The dork tells their friends that night and tell them the same location and time.

The spelling bee went until about 2pm that day. The ring was in the dork's pocket and as the day progressed the more his stomach started to twist in knots.

The hot chick got a call from her mom who told her that Grandpa Flores' birthday will be at Joe's Crab Shack at 4pm. The hot chick thought it was weird, but didn't question.

They meet everyone outside Joe's Crab Shack and exchange pleasantries. Everyone goes inside and sits at the big table set up.

At 4:30, one of the dork's brothers shows up with his fiancé.

He tells them to find a table on the other side of the restaurant and not get noticed by the hot chick.

One brother keeps calling for directions and the dork has to keep getting up from the table to explain to him how to get there. But then they never make it anyways because his wife got sick in the car. Honestly, the dork thinks it was just because she liked being a fun ruiner.

Other people started getting there well before the scheduled time. His father showed up at 5:00. He had specifically told them 5:30pm. Do not come into the restaurant prior to that. It is not like it's freezing outside, they could have stayed in their cars. But no, they had to form a huge gathering at the front door.

Did they want to screw this up for the dork?

Now the dork is extremely nervous. Noticeably nervous. He can't eat his food. Neither can her son. It must have gotten to her as well, because she had to keep going to the bathroom.

At one point the hot chick even passed up one of their friends going to the bathroom.

The dork runs to the front door and introduces everyone. Then runs back to the table before she gets back.

She notices that he's not eating, he blows it off as not being that hungry. She goes to the bathroom yet again and figures that it has to happen now or it will be forever ruined.

She returns to the table and he is not there. He is at the front of the dining area with the house microphone.

He calls her name over the microphone and asks her to stand up, grabbing the attention of the entire group and the entirety of the restaurant.

He goes off about how these events were fast forwarded because someone special had to be here and he couldn't wait three more weeks. He explains how he was supposed to memorize the poem he was about to read, but because he only wrote it two days prior he didn't have time too.

The poem consisted of 102 reasons why he loved the hot chick. He mentioned inside jokes, TV shows they've watched together, movie lines, the way she smiled, laughed, walked and sang. He mentioned the way she touched her nose and how she held his hand. He brought up good times, bad times and perseverance. He included her son and how great of mother she is. He brought up relevant bible verses that pertained to them and the reason why he chose Joe's Crab Shack as a place to propose to the hot chick.

Her mind was racing. She was concerned that the dork hadn't talked to her dad yet, but then saw that he was standing behind the dork. Her only concern now was the fact she hadn't been able to get her eyebrows done.

The dork finished his poem. He then got on one knee and presented her with...

A bowl of whipped cream.

She smiled and laughed then questioned if she had to stick her face in there.

A very nervous dork let her off the hook too quickly and presented her with the box that held her engagement ring.

He placed it on her finger and it fit perfectly.