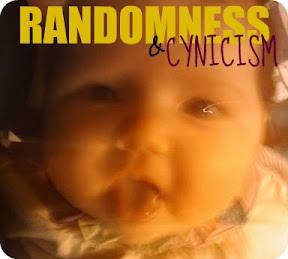 It's another edition of Randomness and Cynicism AKA, I have no topic ready for today.

I got a new toy Wednesday. My wife and I both got T Mobile MyTouches. These are our first internet savvy phones. And let me tell you something,

They are Evil Tools of Procrastination!!

If you already have one or an iPhone/iTouch you know this.

Wednesday night I went app happy. I loaded anything that looked like something I could waste my time with. Yesterday I came back down to earth and deleted things like 'Starbucks Locator' and 'Clubber Lang Soundboard'.

I'm streamlining it to stuff I usually do on the web anyways. Emails, Blogs, Facebook, Twitter and Photos.

My favorite ones so far are Pandora, The Weather Channel, and The Bible.

With this new phone, it pretty much means the end of Ladybug's Portfolio.

Nana got the kids McDonald's Wednesday. It was supposed to be toys from The Penguins of Madagascar, but I guess they ran out and screwed the children with 'Gloria' the hippo from Madagascar. It's packaged as a Madagascar 2, but she has the phrases from M1.

One main reason I'm happy with my new phone is that MaddSkillz does not have one. I say this because I was envious that he had an iTouch and NEVER let me look at it. He was afraid that I would somehow corrupt it or something. I would constantly remind him how I would always let him play games on my phone or computer with out any questions. I took it personally as he feels he could not trust me.

I was waiting for him to ask if he could see it so I could say.

But he knew that I would say that after all his selfishness with his toy. So he didn't ask to look at it and I could tell he wanted too.

So I just offered it up to him when we got home on Wednesday to check it out. I honestly have no problem with him looking at it or doing things on it, I just don't understand his unchanging stance on not letting me mess with his stuff.

My 4YO started calling me "Dad" last night.

I know she was doing it because it bothered me. But still.

She did it to her mother last week as well, calling her "Mom".

But the natural order of things will be that she will eventually called "Momma", "Mom". I should always be "Daddy".

My wife got a new haircut she didn't like. It's super short. She went in for a Posh Spice and came back with a Catherine Zeta-Jones from Chicago look. She's a chick and obviously knows more about chick haircuts than I do. But she posted her pic on Facebook because her fans were clamoring for it. Of course there were the positive reviews, but there was this dude who I assumed went to school with her that said,

"Very cute. And, your smile is still contagious."

He must have had problems with his server because the comment came through twice.

So I replied with a "Simmah Down There"

I gave her a hard time about it the next day. Was I jealous, I don't think so. Heck, I know who she goes to bed with every night. But was this appropriate? Especially on a post where I commented as well? I felt that it was inappropriate.

She has friends that I have no problem with, but I know them. They can say that "it looks nice" or "hot momma" and I have no reservations against them. My concern was that when I went to his profile, I could not tell how he knew her. He appeared to be a single guy and I figured he was just one of those Facebook/MySpace guys who comment on the girls they think are hot in order to solicit some sort of return conversation.

Turns out it's a guy she went to school with. That didn't make it any less inappropriate. Then her mother said what if he was gay. I still said I wasn't jealous, I would be probably be okay with it because there would be no intentions on the other end.

Back to my 4YO daughter. The other day, Ladybug was wanting something from the fridge. I told her "not right now" a few times. After finally giving up, she walked away with a big "Huunnnnhh!!" If you have a daughter, you know what I'm talking about.

Well, I stopped that right there and said not to walk away grunting like that if she does not get what she wants.

"I was just breathing."

I sent her away because I couldn't keep a straight face.

Oh! Since I got the new phone, I have yet to give the kids a bath or feed them anything more nutritious than Cheez-Its.


Have a great weekend my friends.


And while you're at it... Scope out these dads over at Dad-Blogs.com for Fatherhood Friday who I would also have problems with telling my wife her smile is contagious.
mytouch Randomness and Cynicism smiles