Tonight is the beginning of the end for the TV show Lost. The sixth and final season starts tonight on ABC. I remember seeing previews for the first season and my wife and I wondered how the heck they would be able to make a series about being stranded on an island.

Oh how naive we were. The first episode in we were hooked.

Each season finale made me wish that the show came on every week.

With the events of Season Five's finale, my house had a collective "Wha?!" when it ended.

February 2nd couldn't get here fast enough. Well it's here. For those of you who haven't seen Lost; after you slap yourself in the face, check out the video below that will catch you up on everything.

Now that you're all caught up, I will use Tuesdays to discuss my Dorky Lost Theories.

Tonight's show is called LAX. Which is the name of the Los Angeles Airport where flight 815 was scheduled to land after taking off from Sydney Australia. The title alone tells me that the theory to reset time with the hydrogen bomb worked. The plane lands at LAX and the survivors who are actually no longer survivors in the same sense, go on to live their lives like they should have originally.

Jack is depressed about his dad and is quickly becoming an alcoholic.

Kate is still arrested but will escape to run once again.

Claire will take her unborn baby to the prospective parents.

The fan favorites that died during the show such as Charlie, Boone, and Eko will be back. At least for the first episode. But course correction will kill them yet again.

But here's something else. While the plane eventually doesn't crash, the 1977 survivors will still be in 1977 and continue the events on the island not knowing if they changed things or not.

The bomb actually worked and caused time to change, but it actually created an alternate timeline which causes the plane to land in 2004. We've already seen effects of the time change towards the end of season five when Sun, Fake-Locke and Ben were at Otherville and it was in ruins. Sure some could say that was due to Mr. Keamy and his team of mercs blowing the crap out of the place. But the docks looked like they were abandoned some 30 years ago.

I call this theory the Back to the Future Part 2 Theory. I even have a chalk board. 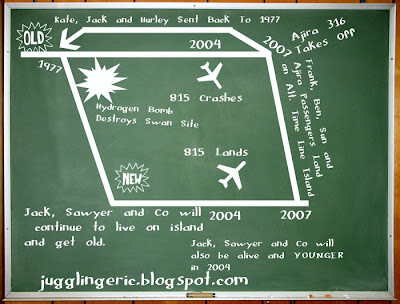 There will be "flashbacks" and stuff, but it will be similar to what we saw last season with the "30 Years Later" screen.

There will be one person who is the variable to all of this.

And his name is Desmond Hume.

Are you going to watch Lost tonight? Do you think of it in as much detail as I do? What do you think? What are your theories?