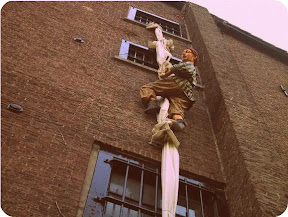 Last night, my wife and I had a semi-impromptu date. Nana and Grandpa Robert were bribed graciously came over to watch the Bolton Brood. The original plan was to go to a movie screening, but the tickets never came through and we opted to go out to dinner instead. Since we had no kids, I could treat my woman to the finer, classier places in San Antonio.

Honestly with no kids, Taco Bell would have been one of the finer, classier places in San Antonio.

It was weird. We rarely leave the house on a week night, but I noticed that a lot of the restaurants were packed. Is this what people do when they have no kids? Go out all the time?

At the O.G., the hostess set up the most obvious joke at any restaurant by saying, "Walk this way."

Any quick witted dad with no kids in tow would have immediately starting mimicking her strut.

But it was a normal walk.

But even the lamest joke is a pretty dang cool joke when you don't have any kids with you.

I did think it was odd because they took us to the back of the restaurant where there weren't a lot of people. My first thought was that they put us back her because we're an inter-racial couple. It's like they have a respectable business to run and they can't have no white boy with Hispanic jungle fever sitting by a window driving away potential clientele.

In hindsight, I'm thinking they put us in the back because we had no children, and that was the area with the lowest density of children.

KC had been on some medication the past week that prevented her from breast feeding during that time. So our first thought was that we can have an alcoholic beverage since we have no kids to worry about, influence or endanger.

Shout out to Kevin, our waiter, for the awesome wine suggestion.

Or was it Jason?

I'm such a light weight now that one glass of wine makes me forget your name.

Our food was excellent. I can honestly say that if there were any kids there, the food would have not been as delicious as it was with them absent from the event. I think it was the first warm meal that I had in a long time. Every other meal I've had my time as a father always seemed to cool down before I was able to take the first bite for some unknown reason.

We went to Starbucks after dinner to get rid of the buzz, and then wandered around Kohl's for an hour because we are lame.

Also because we wanted to milk every minute of having no kids with us.

We got home at 9:30 and Grandpa was missing, yet no one seemed concerned.

The night ended like any normal night when you have kids; Disco not going to sleep, Em fussing, dirty dishes in the sink and laundry on the bed.

I fell asleep with Em on the couch because she missed her dad so dang much and wouldn't go to sleep any other way. Ladybug found her way into our room in my absence and Celi just felt like screaming at 3:30 in the morning.

I guess they showed us what happens when the parental units get out of the house for some alone time.

We're going to drag major butt today because of the kids last night.

But it was totally worth it.

Have a great day my friends.
night out without the kids olive garden