In San Antonio this weekend we had numerous days of below freezing temperatures. Now again, please do not laugh at us. It doesn't happen that often, but when it does San Antonio usually freaks out.
This time was different. There was no precipitation involved with this freeze. So it was just cold and cloudless. We did bring our grizzled old dog in from outside. He stayed in his cage and he would remind us that he needed attention by single barks in the middle of the night. Something that my children usually do when they are in their own baby cages.
Disco, Ladybug and I took advantage of the freezing air by putting toys in water and placing them outside. Saturday morning we made an amazing discovery. It was quite fun and gave me something to do if the dog keeps up with the barking.
Sunday, my Dad invited us to Incredible Pizza. It's pretty much like Gatti Land, but HELLA COOLER!! The kids got to play mini bowling, mini golf and win tickets to turn in for toys that will get on my nerves by the days end.
The highlight of the visit was the go-kart racing. Ladybug and I were able to race together. We pulled up into the number two position. This kid to our left told us "Good Luck!" To which I replied, "You too, Buddy." To which he replied, "No, I mean it. Good Luck!"
Ohnohedidn't
It was on like proverbial Donkey Kong after that. This little kid was talking crap to me in front of my daughter. Ain't nothing going to stop me from taking this kid out!!
I don't qualify to be a NASCAR fan. I don't own an RV to make pilgrimages to Daytona or own Dale Earnhart commemorative dinner plates.
I just know how to kick little brat's arses.
He had the inside lane. I was the outside lane.
We were given the green light and we were off. He made his first mistake 2 seconds into the race when he didn't hug the inside rail on the first turn. I took advantage of his ignorance and took the inside turn and passed him within 4 seconds of the race.
Don't choke on the smoke Nick Jonas!!!
I could hear his heart breaking and could see him getting his butt kicked tomorrow in school for crying all day.
After eight laps were were awarded the checked flag and the first place ribbon. Crap Talker walked away with his head down and his confidence shattered never to have a girlfriend his entire life. And my daughter didn't lose respect for her B.A. Daddy!! 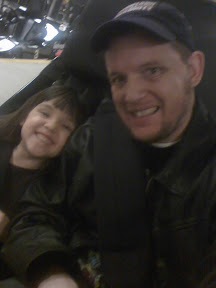 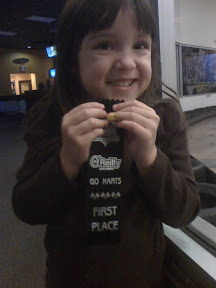 MaddSkillz was with his father so he missed out. He was sad that he missed the event, but we're going to make plans to go back as a family.
A few months ago, my wife and I devised a schedule for the kids. It went pretty good for about a month. Bed rest and doctor appointments kind of screwed that up. I'm going to try and get them back on track with their schedules this week. This includes MaddSkillz with his chores and even KC and myself. Hopefully we can get back in the groove of things and not use the excuse of "we just had baby."
How was you weekend my friends? Were you able to beat a trash talking pre-teen's butt at some sort of sport's activity? Do you laugh at Texas for getting cold?
Have a great weekend my friends.