One of my unofficial resolutions for 2010 is to get my house better organized and better shape. On some days it seems like we should be on an episode of Hoarders. My plan this year is to try and focus on one part of the house a month with the goal of having the house in great shape by Christmas this year.

I actually got to focus on two parts of the house this weekend. The backyard and the attic.


The attic consists of stuff that we really do not need. There are some boxes that I have from college. There are boxes that hold some of KC's old personal effects. I have about 10 boxes of old comics and some of my dad's stuff is up there as well. Also up there are a few boxes of MaddSkillz' old stuff animals. There's also a few boxes are filled with mail that we never opened prior to our move into the house, OVER FOUR YEARS AGO!!

I managed to clear out about sixteen square feet to put the Christmas stuff up there. I figure I can wait until next month to try and work on it any further. There's a lot of prime storage space up there that is being wasted with boxes of unopened bills, stuffed animals and empty PS2 boxes.

With moving Christmas back in the attic, that cleared up some space out in the shed. A lot of space in the shed is taken up by old baby clothes. We saved both Ladybug's and Disco's clothes. Since the past two babies won't be wearing Disco's old clothes. We're giving them to family members with little boys and Goodwill. Once those are out of the picture, more space in the shed.

There's also our old dining table and a twin bed in there. Will they ever be used again?

KC's grandparents gave them to us and we will not be able to get rid of them until they have passed on. They have been in her/our possession for at least 10 years. They aren't the nicest things. It's not like they're antiques. They'd make perfect craigslist items. I'm told that they sometimes ask about them. I'm currently weighing the "less space/family not mad" versus "more space/family not know or might be mad" options.

It sucks not having a garage.

This weekend we hit a milestone in one of our children. One that we had been waiting to get here for about 4 years now.

He started growing his hair out at the end of fifth grade. He won't say it now, but it was because his uncle grew his hair out. Four years later, his uncle changed his hair and MaddSkillz has not. We've told him many a times other ways to style it, but he NEVER listened to us.

What do we know? We're just his parents.

He's in theatre and likes it. He got cast as a "kid" for the second time this year. While it could be because he's a freshman and he needs to continue to try and get better. It could be because of his refusal to change his appearance for a part. Again, after we told him that he needs to be more flexible with his appearance for acting, he looks at us like we're all kinds of retarded. But when his theatre director told him that he needs to cut his hair for a part. He finally concedes.

Yeah, not going to happen. I need to blog about this you know. I told him I would post the after pic, but I'm not really that heartless. But here is the before and after (with some editing). 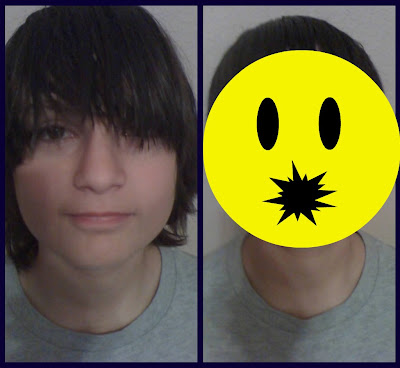 After his objection, he sent me one he took himself. I guess because his phone doesn't make him look like a dork. 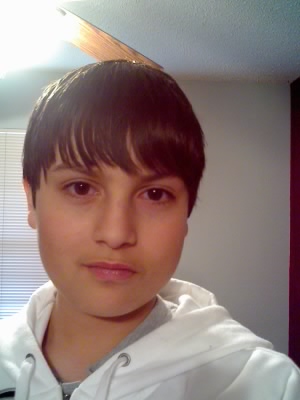 Little did I know that my son was a protege of Derek Zoolander, because it's a pretty dang good Blue Steel.
And it's the exact same cut we told him about for over a year. But what do we know? We're just his parents.
He looks great though.
Have a great week my friends.