What I Want For Christmas: MaddSkillz 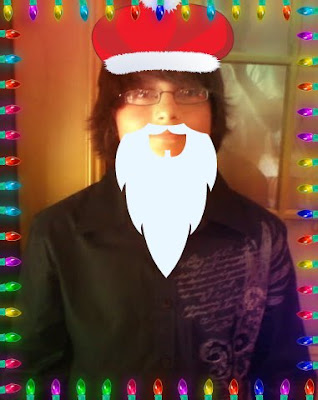 One of the most pickiest people I know is my teenage son. MaddSkillz choices and decisions have given me many aneurysms throughout the years. But nothing has confounded us more than what to get him for Christmas this year. It's hard to get him stuff because he knows what he wants. And if it's not exactly what he asked for, you can see the disappointment behind the pasted on smile. It has only gotten worse during these teenage years.

So the other day he told me what he wanted for Christmas and advised me it doesn't have to be all of them.

- New cell phone, one with a keyboard
- Guitar Hero 5
- Some Other Guitar Hero Game, Legends of Rock or something
- Batman Arkham Asylum
- Marvel Ultimate Alliance

Well thanks, son. I appreciate the advisement.

So I decided to retort with the following points.

- You do understand that money is tight this year and for you to ask for stuff like this is pretty unreasonable right?
- My cell phone started crapping out before yours did. If anyone gets a new cell phone, it's me. You're going to have to suck it up and talk/text your girlfriend on your phone that's nicer than ours.
- Any game I get, you will probably beat by the end of Christmas break and want to sell it to Game Stop by Spring Break.
- But I will discuss this with your mother and see what we can do.

I believe that KC shares my thoughts in this. She is equally perplexed on what to give him as well.

I suggested we just give him cash. She thought it was pretty boring to open up just cash. Oh but she forgot who she was married too. If Creative Type Dad wasn't already taken, that would be me.

My goal is to make him appreciate his gifts. Not just look for what he asked for and give us the "I'm supposed to be appreciative" smile. I'm not sure how much we are going to give him, but I wanted to hide the money in non-descript gifts. Maybe in a pack of socks or white t-shirts. Maybe even something so random that in his head he'll be "WTH?!?" maybe I'll get him a candle and somehow hide the money in or on it.

Because yes, just opening cash is boring. Not for the kid. But for us parents. It's like we didn't put any thought in it what so ever. Doing it this way gives us some excitement in preparation, as well as the potential ribbing we'd accomplish as he opens it.

This is the part I love about Christmas, I'm really not the Scrooge that I've been the past couple posts. I really wish I was able to give my son everything he wanted. Unfortunately, it can't happen this year.

Are your kids hard to shop for? What do you do to keep them appreciative of what they receive?
christmas presents