What I Want for Christmas: Ladybug 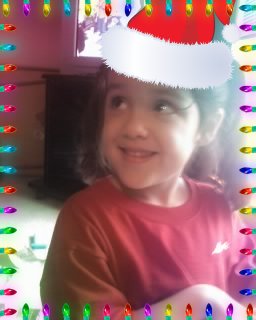 About three months ago, I started having this conversation with my daughter.

I'm not sure what happened. She's seen commercials on TV ever since she started watching Nickelodeon (Playhouse Disney doesn't have commercials). Maybe she made the connection that what they show on TV, they also sell in stores.

Now it's monsooned in EVERYTHING she sees on TV.

It doesn't matter that we have neither game system. So she trumped it with.

I no longer look at the TV when she says something. She'll shout at me while I'm in the kitchen.

I yell back. "OKAY!!" Not knowing or caring what she wants.

My wife does similar stuff, like "When we can afford it, I want to get a couch like this..."

Now I don't say it to shut her up or to pacify her dream. I say it because it's the same as my daughter's wishes. If I could afford it, I would get them both everything. But right now they're both getting the same answer.

My dad is a store manager for Family Dollar. He brought home this catalog and it has a crap load of stuff for five bucks.

I gave the catalog to Ladybug for her to tell me what she wanted.

On the cover alone she said, "Tinkerbell, the baby, the dollhouse, Mickey Mouse, The princess cups and that!"

Which is EVERYTHING that a girl might want on the cover. The other stuff she said her little brother would want.


When Christmas eventually gets here. I know that whatever Santa brings, she'll love it. Then she'll see what her brother got and love that too and want to play with his while not letting him play with hers.

It's like a big sister rule or something.
At what age does your kid start expecting to get what they want? Are they there yet? Do you get it for them? How do they react?
Have a great day my friends.
Als0, please remember that my Christmas Book Giveaway ends tonight. Get your entries in.
christmas presents