Countdown to Cinco - T Minus ZERO 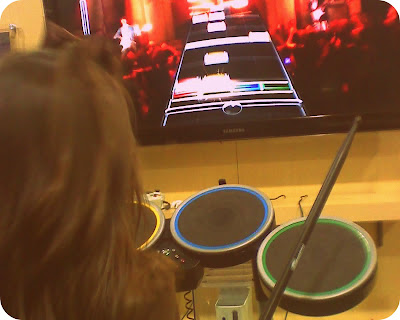 Nesting and Raking
We've finally hit week 37. Week 37 is the week everything happens with my wife's pregnancies. While she's not due until January 10th. We feel that her actual due date is December 21st.
Today.
After what seemed like we were going to have the baby Friday or Saturday, turned to not much happening in that department. I figured that something was going to happen on Saturday night. From out of nowhere, my wife wanted to clean out the utility room. I was quite positive that she was nesting. She's told stories that while pregnant with MaddSkillz, she just started cleaning and he came pretty soon there after. But nothing happened. While she could be "nesting", it's not time just yet. If she needs to do some additional nesting today, I'm going to hand her a rake and point to the front yard.
The Juggling Eric United States Tour with Ladybug
We finished off most of the Christmas preparations this weekend. We had to drive across town to the only Best Buy that had a camera we are giving MaddSkillz. While there, Ladybug discovered RockBand and didn't want to leave. We then head over to Old Navy and there was a RockBand set up there as well. Well, that made her all kinds excited. She wanted me to sing along while she slapped the skins. I declined. I then later felt I should have. What would have been cooler than a dad belting out "Eye of the Tiger" being accompanied by his daughter's mad drum skills in the middle of Old Navy?
Christmas Carpal Tunnel
I won some customized cards from Digital Room via Daddy Forever's Blog a few weeks ago. They arrived and we chose to utilize them as Christmas cards. I would have used them for thank you cards or baby announcements, but since I had to take advantage of the offer prior to December 31st, I chose Christmas. They turned out pretty nice and KC spent Sunday hand writing all the cards. Turns out that we have close to 50 friends and family that we're sending cards too. I think we've been scratched off people's lists a few years ago since we've never sent any out. Now I just hope that we actually get them mailed out. If we don't, I'm sure KC will be all kinds of pissed because she spent close to five hours writing out all the cards.
This is why I need Astronaut Sleeping Bags
And because we don't like the kids going to sleep, we moved Beautiful in with her siblings. She has been in our room her entire life. Now she's going in with a couple of rowdy kids. We are moving her from our room because she is a light sleeper. If I even think about getting out of bed or entering the room, she'll hear my thoughts. With the baby coming soon, we could only imagine how much sleep she'll get with Cinco waking up every couple hours to feed. Last night was the first night. It wasn't pretty. We eventually got what we wanted. Three kids sleeping in the same room, but didn't happen until 10pm.
On the good side. I was able to go into my room when I went to bed and make as much noise as I wanted to.
Santa Checking In
Sunday, I went to Christmas Dialer. It's something that I found last year that sends out free Santa recordings. While not personal, it has a few options of what recording you would like to use. I entered our phone number, turned down SpongeBob and had the kids come to one room. We waiting and nothing happened. Ten minutes went by and nothing.
Crappy Vonage.
I tried calling from my cell phone, but I was afraid that I would call at the exact same second that Santa would. So, I checked the website and like a dork, I entered the wrong number.
Are you serious, Eric?!?!
I tried to request a new one, but I am only allowed one request. The next one would cost .57 cents.
Give me a break.
So I called Nana and had her request it. Santa called and the kids freaked out. Not freaked out like when they had their pictures with Evil Santa, but freaked out with extreme happiness. They start jumping up and down repeating what Santa was saying. Ladybug called Nana to let her know that Santa called.
I love seeing how much she loves Christmas.
My only concern now is that Cinco will want to come on Christmas Eve. And I mean Christmas Eve when Santa is coming and we have to run off to Labor and Delivery while his elves are setting up the gifts. We decided that we'll just tell the kids that Santa will come when Mommy and the baby come home.
I hope they buy it.
Hope you all had a great weekend.
Have a great week my friends.