Barn Wars: Attack of the Clones

Posted by ericdbolton on November 03, 2009
I had another post scheduled for today to be concluded Friday. It touched on a sensitive subject within my family. I decided to pull it at the last moment. Hopefully I will feel more comfortable postingit at a later time. But in it's place, Igive you a blog post I had on my MySpace blog from January 2008. 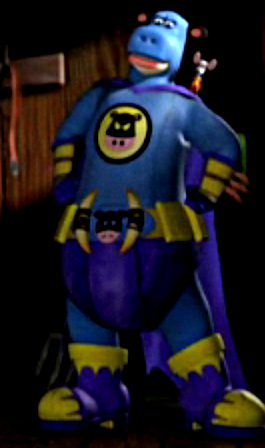 The other night on the news they started talking about the issue about the possibility of cloned meat being available to consumers through our supermarkets. Cloned meat of course, meaning coming from cloned cows. Now these aren't clones from Vaca Fett the Cow Bounty Hunter in some far reaching scheme by the Empire for complete galaxy control. It is of course regular cows that have been cloned by scientist trying to replicate cow life.

Now while the idea of an army of cloned cows as foot soldiers in the domination of our galaxy does sound like a cool idea on paper, that is not what cows are used for. Cows are used of course for eating their flesh and drinking their milk. Cows are a reason I am part of PETA. People for Eating Tasty Animals. So, the obvious question about the reasoning for cloning cows would be. What do you do with them now that you've cloned them? With the idea of a universal empire out of the question, the only thing left to do is eat them. Because frankly, cows aren't needed for anything else other than drunken nights with rednecks tipping them over.

So, that is where comes the issue. Will stores sell cloned cow soldier meat? HEB says they don't plan on it. Neither does Wal-Mart. But Target is like. "Maybe."

But it's not going to be any time soon. Because cloning a cow is pretty expensive I guess. And the subsequent killing of said cloned footsoldier cow for dismembering and selling in various parts would not equal the total cost it would be to make the godless being. So, what scientist are waiting to do is wait for these cloned cows to have real baby cows and then use them as our possible food product. It makes sense.

My wife though. She's more of a "I can't get past the fact it's clone" person. While I doubt she has problems with the fact that they clone cows and chickens and sheep to begin with. She doesn't think that she can mentally put herself past the idea that the meat she is about the eat was not created from the earth.

It's totally like the fact she won't eat the green or purple colored ketchup. It tastes the same. Just looks unnatural.

So, I tried to convince her that there wouldn't be anything wrong with eating cloned cows. So, I tried to turn it around. I asked what if we cloned our dog if we lost the one we had. Nothing. She hates our dog. Then I asked, ok. What if something happened to one of our kid. Your precious sons. Your beautiful daughter. What if you could bring them back through cloning?

She stuck with her guns.. She wouldn't eat them either.

Have a great day my friends.. God Bless