The Story of Seth!! 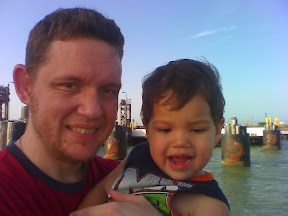 After my oldest daughter was born, my wife and I were content. We had my [step]son and now our baby girl. Within a few months we had to deal with our daughter being sick all the time. And I mean all the time. My wife was constantly taking off from work. She filed for FMLA and was out about 3 months. It was about to run out and they gave her the option to come back to work or to resign. We talked about it and she resigned.

It turns out my daughter has IgA deficiency. It's an immune disorder that makes her prone to illnesses and infections easier than others. She had GERD, numerous ear infections, coughs, colds, and even got a staph infection in her first nine months. She has had multiple invasive procedures to try and figure out what was wrong.

During this time my wife, who has previously stated she wants more children, said that she didn't want anymore kids. MaddSkillz was a breeze, outside the typical ear infections or colds. But trips to the Hematologists, ENT, and Gastros wore her out. I was bummed, because I wanted to have two more. But whatever Momma wanted, that's where I went.

Slowly she started to sway on the matter. She was considering it again. Maybe it was because Ladybug was getting better, but a short time later she was pregnant. We were excited. We were also concerned about what if this happens with this kid as well.

KC researched about the benefits of Cord Blood Storage. We found out that the saved cord blood could help with disorders such as what Ladybug has. We were going to do everything we could to save enough money to pay for the storage.

One day we get a phone call from the Cord Blood Registry. They told us that we approved to get the collection and storage for free.

If anything were to happen with Ladybug, we would be covered.

Like with Ladybug, KC ended up being on bed rest for my son as well. Her water broke while we were at a Halloween Party. I'm glad it did, because I had fallen asleep on the couch with the kids. We left Ladybug with grandpa and we trotted off the the hospital.

He was a month early and labeled pre-mature. He had to stay an extra day in the hospital which killed us. KC was discharged but they told us we could stay until 11PM. We milked every last second of that hospital room with him and was back first thing in the morning.

We haven't had to use the cord blood for Ladybug yet. She's gotten better as she's gotten older. Disco has grown into a cannonball of excitement. He will walk up to his mother and I and just hug us and tell us that he loves us. He's fearless and indestructible. He loves his sisters and brother and is spoiled rotten by his Nana.

Happy Second Birthday, Seth Daniel. You are a blessing upon this family and everyone that you meet. Daddy loves you with all his heart. Thank you for being my son.

Below is a video that I actually put together BEFORE he was born. I was driving home months before he was born and I heard this song on the radio. The events of that day [in the future] played out in my mind. So when I took these pictures, I was documenting what I had already planned. So, if you want to see more sentiment and have five more minutes to waste. I invite you to see the blessing that happened on October 28, 2007.


Tomorrow I will show another video of how he was dubbed "Disco Seth."

Thanks for checking us out. Have a great day.