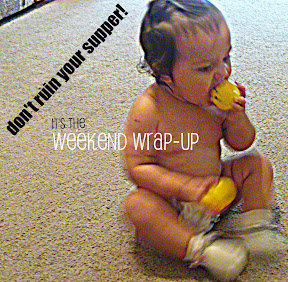 We had a tough weekend. It started Thursday night when I took the wife back to the hospital for the second time that week. She ended up staying until Saturday afternoon. Before she came home, I was dead tired. Both times last week when I took her in, it was after midnight. So my chores and schedule that I've worked hard to keep up with had fallen through. Some people might say, "that's okay, you have a lot going on." But it doesn't work that way with me. It's almost like a compulsive disorder that I have. If there is a big pile of dishes in the sink or laundry that needs to be folded, I can't concentrate. I can't work while I am at home because I feel claustrophobic. But I was able to catch up on everything that I slacked on the previous days.
I even got to play Marvel Ultimate Alliance 2 for a couple hours with my son. The other options were Batman Arkham or Smackdown/RAW 2010. I chose Marvel because I'm a dork, plus if I was playing Smackdown, I would have spent the entire time creating a wrestler instead of actually playing.
My little one turns 1 year old in a couple weeks. During this past year, I can say that she has probably slept through the night about sixteen times. Now it's not like we live next to railroad tracks or we party like it's 1999 all the time. We are actually the most boring people we know. For the past two nights, she has woken up and we could not get her to fall back asleep.
Saturday night she woke up and we couldn't get her back down the normal way. I even tried a 2am drive around the block. The only person that fell asleep was Daddy. She wasn't hungry. She didn't have a fever. And she screamed relentlessly every time we tried to lay her down. Finally, I gave her some Tylenol, a bottle, and laid her down in her crib. I have never put my kids to bed with a bottle before this one. And if I do, it's only because I have to leave the house at 5:30 and her 3:30 wake ups will almost always cause me to miss my alarm if I stay up with her longer than a change and a bottle preparation.
Sunday night more of the same. My wife was already up. Her sleeping schedule changed when she was in the hospital last week. She now has the sleeping habits of Nosferatu. The baby woke up and never went down. She screamed and screamed when she tried to lay her down. She had screamed about 20 minutes when I got up again and took her to the kitchen. It was about 4:30 by this time. The wife wanted to know why I got her up. I said she is on the verge of losing her voice (seriously) and even if she is tired, she does not need to lose her voice. I gave her some more Tylenol and some apple juice, sat with her on the couch and she was out in ten minutes.
At 5AM, I was hoping she would sleep at least three hours. She woke up at seven.
We don't know why she won't sleep through the night. She is not teething. She does not have a fever. She is not hungry. She does not sleep too much during the day. She sleeps for about an hour and a half after lunch and I lay her down around 8pm. She's usually up at 11:30 for a bottle, 3 o'clock and then 6 o'clock. Each of these and she'll sleep until the next time. Save six when she sleeps another hour, maybe.
Recently, I've tried to just hold her until she goes back to sleep. I've had mixed results.
She weighs about 21 pounds. So she's not failing to thrive.
My thoughts last night were because Mommy was up. She hadn't seen Mommy in a few days because of the hospital. She just wanted to be with her.
But I don't know. She'll be a year old soon. I feel she's old enough to sleep through the night. Both her brother and sister had been at this point. We're going to have our new baby soon, and I really don't want to play dueling babies every night.
That could also be the problem. She somehow has baby spider sense that tells her a new baby is coming.
Any of you other parents have this same issue? How did/do you handle it? Any ideas to what this kid's problem is?
Have a great week my friends.
Eric