Because of bad financial decisions, that's why!! 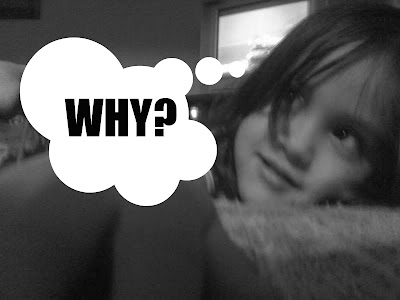 Ladybug has a new gimmick as she is getting closer to being a four year old. "Gimmicks" of the past have been where she makes us call her "Super-Hero" or "Ninja Turtle". She never really had a princess gimmick or anything that would make my wife happy. It usually involves some sort of sport, wrestling move, zombie, transforming robot, ninja or explosion. It's something that would make a father proud.

But this new thing that she does is question EVERYTHING. Maybe if you've had a child reach the formidable fours, they could have done things similar. Now, when I say that she questions everything, I do not mean that she is disrespectful and argues with her parent's decisions. She literally questions EVERYTHING.

She questions us by asking "Why?"

Again, it's not why she can't do something. She actually wants to know why things are the way they are. And being the type of dad I am, I answer her with some sort of reason.

Here's what I am talking about.

Last year, my office had a raffle for a 36" TV. A friend of mine won and gave me the TV. This is where this is coming from.

"Daddy, why did you friend give you the TV?"

"Because he already didn't want it."

"Because he probably already had a nicer one."

""Because he bought it from the store."

"Because he liked the options that the TV has."

"Because that's the way the TV company made the TV."

"Because they wanted to make money."

"Because they didn't have a lot of money growing up."

"Probably because their parents didn't have a lot of money."

"More than likely it was due to bad financial decisions they made early on in their life."

"They probably bought a house with an adjustable rate mortgage and couldn't afford it."

Now I know I only encouraged her by giving her an answer. But it's conversations like this that I enjoy. She makes me think and I have a feeling that she's not just being annoying, she's actually learning and storing all this nonsense. I know it makes her think too. I feel it promotes her creativity.

One of my brother's did the same thing when he was younger. But as his older brother, I took advantage and gave him wrong answers for the purpose to screw with him. Like telling him "being constipated" meant you're smart. My daughter, is learning to be an even more effective evil genius than I am.
Did you like this post? Please leave a comment and let me know what you thought. You can also subscribe to these posts
HERE. Or any other place on the pages that offer subscriptions.