Posted by ericdbolton on September 10, 2009
This week, MaddSkills is having auditions for an upcoming play at school. He got the acting bug one evening years ago, when he was making his mother laugh by quoting movies in the backseat. His mother told him that he should be an actor. Was it a rhetorical "you can do be anything you want to be" remark? I want to say it was, but MaddSkills ran with it.
His first audition he got a lead part in a school play. It was one of my proudest moments when he called and told me he got the part. The following year he won a UIL award for a small play in competition (with a broken arm). Last year he helped direct the spring play.
This year he's in high school and going out for a part in Annie Get Your Gun the Musical.
He's concerned about these auditions because it's in three parts. Two of the three he doesn't do.
Monologue, Dancing and Singing.
I would have loved to been in the audience on Tuesday to see him do his dance number. Only because parents love to be there for those awkward moments for their kids. Especially when they are trying really really hard. He came home and said he did "ok". Nothing big. He knows that it's not one of his strengths.
Yesterday was singing. Again, not a strong one for the boy. I'm sure most of us have seen Peter Brady singing in that Brady Bunch episode. Peter is the Fourth Tenor compared to my boy. I'm not trying to be mean. The boy does try hard. Again, he's just at his awkward 14 year old boy stage where nothing on your body works the way you would like it too.
I dropped him off at school yesterday evening. He said it would only be 30 minutes and I asked if I could go watch. He gave me some crap about it not being open to audiences or something. This wouldn't have been a time where I would want to be there for the awkwardness of it, but for honest support. Thirty minutes later he came out with the same lack of enthusiasm as the night before. He knows he's not a strong singer which is why he hopes to get called back tonight for the monologue part of the audition.
The monologue he prepared for is a part in Nacho Libre. MaddSkills says that his influences are Chris Farley and Jack Black. Which there is nothing wrong with that, but I feel that he's limiting his potential entertainment facets. He needs to expand and be open to other actors and actresses. Watch ones that carry a scene with their presence. And not ones that have to be the fat idiot to do so.
Actors like Tom Hanks, Danzel Washington, Harrison Ford, Eric D. Bolton..
Yes you read that right, Eric D. Bolton. MaddSkills' father acted in a major Hollywood movie. You know, the war movie that starred Matt Damon..
Maybe you heard of it..
Courage Under Fire.
Starring:
-Denzel "Virtuosity" Washington
-Lou "Sha-vez" Diamond Phillips
-Meg "Rom-Com" Ryan
-Matt "Really Anorexic" Damon
And Introducing:
-"Pre-Juggling" Eric D. Bolton
I played the part of United States Army, Private Taylor. I was part of an eight man team that was responsible for a top secret operation. The "op" was so classified that even the producers, writers or director didn't know what exactly we were up to. Our mission took us right between Lou and Denzel. Denzel was sitting on Lou's car and Lou had just thrown a cigarillo on the ground. I was positioned in the rear rank closest to Lou Diamond.
Here's a screen shot from a Korean youtube-esque site.. 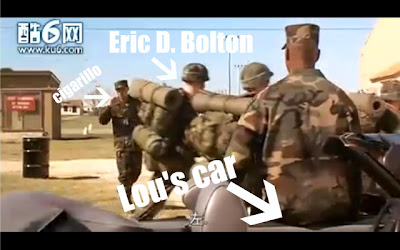 I tell my son that I drew my motivation from a scenario I created in my mind. I had a gal back home. We were high school sweethearts. She wore my varsity jacket and class ring. I had promised her that after I made the rank of Sergeant, I would marry her and get her a house in the country. We'd raise our kids to be congressmen and retire enjoying our grandkids playing in our vineyard. I carried a picture of her wherever I went. I showed it to all of my buddies.
The subplot of our mission was left on the cutting room floor.
The final edit of the movie just has marching to a vanishing point in the background. After viewing the film, it made me feel like they considered me as only an extra.
WTH?!?
I spit on extras..
PTUI!!!
For that reason alone, I opted out of appearing on the VHS Tape Cover.
It's probably best the way it turned out. Because usually, when you have a character such as United States Army Private Taylor they end up being the first ones shot and killed in a war movie.
So, there's still a possibility for a sequel.
But back to my original point for this entry. I am very very very proud of my son and the commitment that he has given this over the past few years. It is something that he really wants with his life, he can take his "guns" and show them off somewhere else later. Something that isn't a High School Musical..

---Post Script Disclaimer. There actually is an accomplished actor named Eric Bolton. if you IMDB him, you'll see his resume. The only reason I know this is when I was shopping for my website domain, ericbolton.com was taken. So I started going by Eric D. Bolton 3 years ago.---