Posted by ericdbolton on October 28, 2008
When I was growing up I was scared of my dad. I was scared because I felt nothing I did was good enough for him and I was afraid I would upset him no matter what I did. Like many my age and older, I'm sure they were real familiar with the thick leather belt with the name "DANIEL" in black cowboy font coming off the back of the belt. Now my dad wasn't the kind of dad that would beat my butt at random times to keep me in check, I just feel that the punishments came with frequency because he was either stressed, angry, unhappy with other things going on with him. After each time I would say that I would never treat my kids like he did me.

Fast forward to present. I have three kids and one on the way. Oldest kid is thirteen. His name is Michael. Technically he is my step-son, but I consider him my son. I love him as my son, I would give everything for him. But I've only been his parent for almost 4 years. I've known him more than half his life and I'm there more than his father ever has. Which is why it is my responsibility to teach and guide him in the right direction. Little did I know that this was going to be the hardest thing I've ever had to deal with.

Michael had almost 9 years of no responsibility. He was an only child and had 100% of the attention. I come around, get his mom pregnant 3 times, and expect him to contribute to be part of the family in the span of four years. Unlike my daughter and baby boy who I can mold and train as they grow up, I do not have that luxery with my son.

The main problem that I get from him is not helping out or pulling his own weight. He never had to do it with his mom, but I expect it everyday. Do I get it everyday? Not so much. I would be stretching if I got it twice a week sometimes. Now he has his regular chores that he usually has to be reminded to do. We've told him countless times about it. His grandfather has told him about it as well. The difference is that he's scared of his grandfather. His mother and I? Not so much. Sometimes he makes me wish that I had a thick leather belt with the name "ERIC" in cowboy font, but it has never gotten to that point. With him, I have to be a bit more creative.
Past disciplines have been where I wake him up at 6 in the morning, make him stand up against the wall, tell him what he did wrong. Then I had him go to back and forth to his room and the wall for various objects that were being taken away from him for an unspecified amount of time. One time when he couldn't keep his room clean, I brought about a dozen boxes from work and I put everything that wasn’t bolted down in those boxes to where he had nothing left in his room. There was no way he could mess it up afterwards. Those were ideas taken from my Corps of Cadet days.

Lately it's been the standard "groundings." We've taken away his phone, his TV, computer. Short term it worked, but nothing long term. Now I have to get more creative. 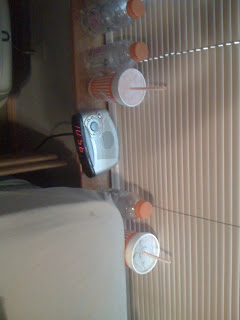 Violation: We've told him countless times to not leave soda cans or empty glasses or cups on his window sill. I went into his room this morning and saw one on there from a soda [whataburger cup] that he could have had last night. I'll get to the could have had in a minute. But if it wasn’t from last night, it means it was there longer than 10 hours.
Corrective Action Taken: So what I did was get a few more empty Whataburger cups from the garbage, some empty Gatorade bottles and put them all on his window sill. See picture.
Reasoning: If he's not going to clean up one all by himself, I'm going to make him clean up FIVE when I tell him. In hopes that he will be more attentive to what he leaves behind and picks up after himself. 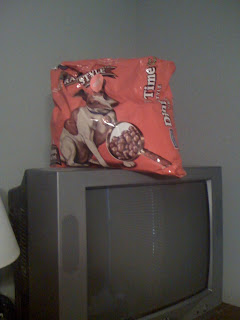 Feeding Dog
Violation: My son is responsible for feeding and watering the family dog. The dog sleeps in his room. The dog follow him around. Yet that clue along with us telling him to feed the dog everyday, he neglects to feed the dog.
Corrective Action Taken: Take the giant bag of dog food and keep it stored in his room on the television. See picture.
Reasoning: That if I have to be put out by doing his duties, he is going to put out by this huge bag of dog food in his room. By hoping that this reminder will help him get into the habit of not having to be told.
Desk 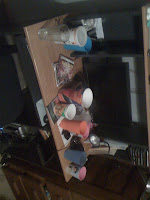 Violation: Not putting away glasses or cups that he was using and leaving them on his desk. This one had a Whataburger cup on it as well. He only had one cup from last night. Why was there two? One of them had to be there more than a day because I do not remember the last time he had Whataburger.
Corrective Action Taken: Get a lot of cups from our cabinets and put them on his desk as well. See picture.
Reasoning: Same as the garbage on window. 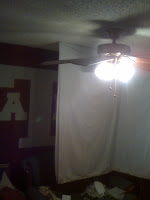 Shower Curtain
Violation: His mom has requested that we close the shower curtain when we get out of the shower. I have made it a habit. He has not. Every morning we have to tell him to shut the shower curtain. I even put a large note on his door to shut the curtain. It worked for a while, not it has just become door scenery.
Corretive Action Taken: I took the old shower curtain and hung it in his room. See picture.
Reasoning: By making something so big, obnoxious and annoying that he has no reason not to forget to close the dang shower curtain. This too will remain as a way of making it a habit.
I hate being like this, because it takes stuff away from what I really have to worry about. But I need him. I need him to contribute to this family. And he is not going to be getting the cowboy belt like I got.
But I told him, "You tell me what you want and I give it to you. I ask for something that I need from you, and you give me what you want. Pretty soon, you are going to tell me what you want, but I'm going to only give you want you need."
I don't remember being this complicated. I asked how high when my dad told me to jump. Michael questions the reasoning for jumping. I don't want him to be scared of me, but I just need him to contribute to this family. I am not taking the "he's thirteen years old" excuse. He's in this family, there is no excuse.
My wife has similar issues with him as well.
We'll see if it's going to work.
Until then.
Eric.
corps of cadets discipline dogfood family punishment shower curtain son teenager thirteen whataburger