I Have a Twin Daughter.

Three years ago my beautiful daughter was born. I was at work when my wife called me and said that she is having bad contractions and that she needed to go to the doctor. So we did, and about 5 hours later my daughter was born. What is funny about this is that I was there at conception. I was there at all the office visits and sonograms. I was even there in the delivery room when my daughter became the most beautiful baby born in this world [outside Jesus the Christ]. My wife and I did a great job. She was like Mary Poppins.. Practically perfect in every way. If I could do one more children's reference I would say that if there was a spider in the delivery room, she would spin a web that would read "One Terrific Kid." What I was unaware of is that she was actually two kids. 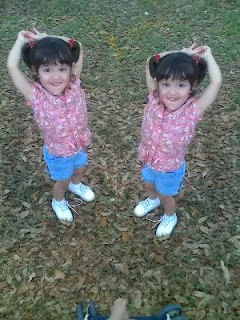 Examples:
-Take the toilet paper from the bathroom, unroll it, and then make the prettiest wedding runner ever to exist out of Angel Soft. - My Daughter
-Draw a picture of her and momma. - Her Daughter
-Take all the books from the bottom three shelves, lay them down in the living room to make her own version of ceramic tile. - My Daughter
-Make a bed for all her Care Bears in the entry hall. Complete with pillow and blanket. - Her Daughter

You see the theme here? Whenever it is something that might be construed as destructive or annoying it's my daughter. Then when it something that is cute or artistic it's her daughter.

This brings us to today. I'm at work and I get this text message. "You will not believe what your daughter did." I responded to an earlier situation where she told me that Loreli had ran over to her little brother (Seth) gave him a big hug, said "I love you Seth" and then danced with him. I asked her if that was my daughter then too. She replied that it was her daughter at that time. So I asked what happened and got this:

"She locked Seth and herself in the bathroom and poured toilet water all over him and would not unlock the door. I could feel water splashing under the door."

YES!! This made me laugh out loud.. LOL even. The first thing I did was ask for a picture. But apparently there was not enough time and my wife did not see the humor in it as I did. Probably because she had to clean up the mess and I was at work laughing about the entire event.

But it's MY daughter.

Hmm mmmm.
Until next time.