Posted by ericdbolton on September 24, 2013
Depending on which syllable you emphasize, you can change the meaning or context of a particular word or phrase.

Let's try the phrase, "Oh my goodness!"
One way it can be said is, "oh my GOODness!!" - Emphasis on the GOOD.  Used as expression of delight.  Something so pleasant to look at that it hurts.  Used on September 24, 2001 when Eric walked into a building and saw Kristie for the first time and thought she was the most beautiful woman he's ever seen.
Another way it can be said is, "oh my goodness..." - no emphasis on anything. Actually a de-emphasis as the words come out of your mouth.  Used as an expression of disbelief.  Not to be taken as a good thing.  Used on September 24, 2001 when Kristie sees Eric walk into a building and silently prays that he stop looking at her and walk back out the buildling.
Today is the twelve year anniversary from when Kristie and I first met.  Tomorrow will be the twelve year anniversary from when I knew I loved her and would do anything for her for the rest of my life.
While a lot of things have changed, there's one thing that hasn't.
She can still make me say, "Oh my goodness!"
And she still says, "oh my goodness..." 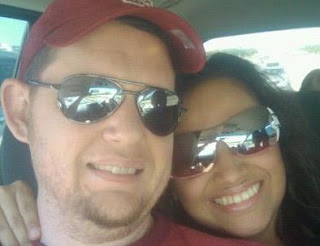