The Welcome to Boltonshire Saga [Conclusion]

Posted by ericdbolton on June 07, 2013
All week, I've been posting previews of the comic book adaptation of my blog.  Judging from the repsonses I've gotten (or lack thereof), these will sale miserably.

It's all good though, at least I might be invited to Alamo City Comic Con for free to set at a panel and discuss behind the scenes in the collaboration.

Anyways, the first four previews were all kid-centric.

Part five focuses on myself and Kristie as we are surprised with an oncoming force known only as "The Sixth". 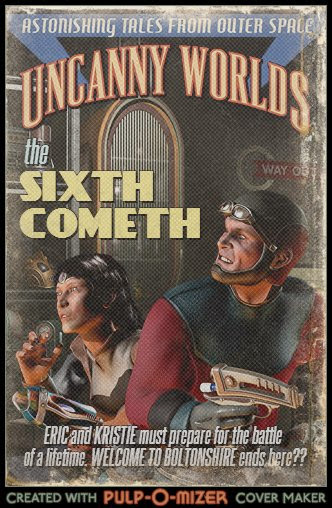 UNCANNY WORLDS
Story Arc:  The Welcome to Boltonshire Saga
Issue Title: The Sixth Cometh﻿
PREVIEW
The Bolton Clan has been spread thin in recent weeks.  Scattered through out the galaxy, the children of the Shire must return home to find out what happened to their parents.  Eric and Kristie were swept away unexpectedly by a force known only as The Sixth.  Prophesy has warned them to prepare for the arrival of The Sixth.  The Boltons must re-unite and stand together like never before.  But is The Sixth a foe, or friend?
Obviously, these books are never seeing print.  I found the Pulp-O-Mizer some time ago and thought it would be a neat﻿ to incorporate on my blog in some form.   Since I'm a dork and I like comics, I figured it would be a nice fit.  So if you want to waste some time, go check them out.
Anyways.
Have a great weekend my friends.
Welcome to Boltonshire.
comic books not a real comic book pulp comics pulp-o-mizer rosco uncanny worlds welcome to boltonshire