Posted by ericdbolton on September 20, 2011
So it's Week 2 of my attempt at Fantasy Football this season.
This week: El Supremo Maximos (0-1) vs Team Lora (0-1)
If this was a televised game, you can bet no one would want to watch it.  You have a team that is only there as a place holder until it can be picked apart later in the season, then you have Team Lora.
I honestly believe that my brother put his friend on the schedule as a place holder.  A just in case in case he can play later.
So I came into week two after a humiliating defeat against my brother's team the Thunder Dumplings.
Queue the hysterical laughter of all the 17-37 year olds douchebags who watch Tosh.O.
And if you remember I expressed my hatred for the Pittsburge Steelers Defense.  Now I wouldn't have won if they did any better.  I was just disappointed with their negative debut.  Then there was the rare incident when grizzly bear attacked my kicker, Nate Kaeting, and tore his leg off,  Thus causing him to be out for the season.
So I stated I was going to bench the Steelers D out of being pissed and replace them with the Chargers Defensive.
A response to my blog threatened me with bodily harm advised me it was best to keep the Steelers D.  I confirmed this with a co-worker who mirrored the other threat advice.
I kept the Steelers and they scored the fifth highest in FF scoring.  Did I mention how much I love the Steelers? 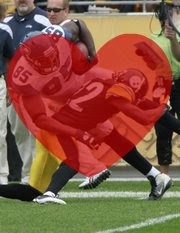 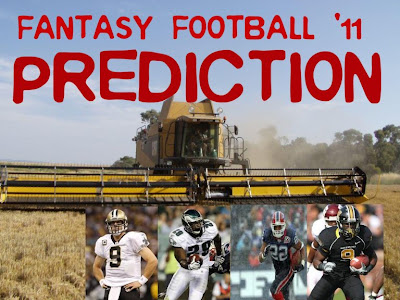 Next week El Supremo Maximos (1-1) will go head to head with Team Pace (1-1).
Oh and one of my predictions about the season from my first Fantasy Football Post was that Tony Romo will be injured.  Well yesterday he decided to crack a few ribs.  Sure he won the game, but he didn't really let me down.  I expected it.
How did your team do?
Have a great day my friends.
drew brees fantasy football fantasy football 2011 fred jackson i suck at fantasy football jeremy maclin lesean mccoy pittburg steelers defense