Posted by ericdbolton on December 18, 2010
So on Thursday while standing at the bus stop, Ladybug was surprised by a little cat who meowed behind her.  She wanted me to hold her and told me she didn't like cats.  Which is cool with me.  I hold her until the bus arrives, place her on the step then leave.  The last I saw of the cat it was chillin' at the corner.

Last night (Friday) circa 8pm or so,  my dad gets home and asks if we adopted a new pet.  I informed him heck to the no, go and look and it's the bus stop kitty just chillin' on our front porch.

At least it didn't run in like Happy did when we first met her.

I just ignored the animal hoping if we didn't pay attention to it, it would just find some other family to bother.

Emsters decided to have a Daddy / Daughter date last night between the hours of 1:30 and 5:00.  She played and I watched the season finale of Burn Notice and the pilot of Breaking Bad.  You know who was also up at that time?  Yep, Bus Stop Kitty who is constantly meowing and even scratching on my door.

Emsters finally lays down, I go to sleep and when I awake a few hours later, Ladybug is telling me the cat is still there.

So there's the cat.  Ladybug tried scaring it away with a few repetitive "shoos" to no avail.  She even tried to scare it with Mr. Sock Monkey. 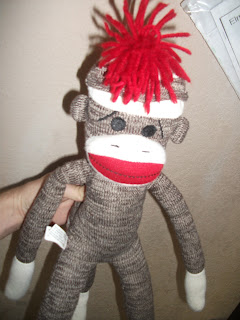 It still didn't work.  So this leaves me to a few theories:
Of all those, the one I'm closest too is the third one.  But I gotta tell you,  I'm tired with little sleep last night and I got to work some OT today.  As much as I would enjoy time travel, I'm just too dang tired.
christmas carol christmas kitty pet semetary cat sock monkey time travel