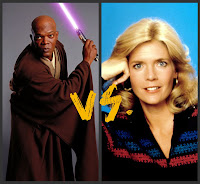 One afternoon about two years ago, I was watching Spider-Man 3 on DVD.  It was a rare occurrence in which I actually had control of the television, let alone time to commit to a movie.  In all honestly, I was probably busy with something while watching and had it "on in the background".
Towards the end of the movie when Spider Man was getting his spider butt handed to him by Sandman and Eric Foreman, Ladybug comes in the room and sees what I'm watching.  I'm not sure if it was the action or the drama of Mary Jane screaming in peril while being suspended high above the ground via spider webbing that grabbed her attention.  The next thing I knew she had laid down on the floor, put her chin in her hands and watched the rest of the movie.
She would ask things like, "why is she in the car?"  "why are they doing that to him?" "why is Peter Parker wearing eye liner and all emo???"  I would briefly explain to her what's going on, and it pretty much had to do with good versus bad.  If I knew a scene was coming up and would be particularly graphic to her, I would call her name, tell her to look at me and hold eye contact with her until it was safe for her to see again.
Sometime later, I was watching Indiana Jones and the Kingdom of the Crystal Skull.  In comes Ladybug and asks about what's going on.  I explained to her George Lucas had a heavy hand in this movie and must have something on Spielberg to make the movie about aliens who just leave once they get their heads back.
This type of scenario would happen again and again when I would watch one of  "my movies".  It was never, "Hey Ladybug, I'm going to watch Predator, you want to come sit with?!?"  It was always she would come in during an action sequence and the music and timing on screen is what drew her in.  She would never last longer than the action and would always take off or want to watch something else when the action was over.
But still, it was a nice little bond I have with her.
One night this past weekend, I let the kids stay up a little later one night.  The TV found itself on "Clone Wars", the Star Wars cartoon.  Not really being familiar with the show, I could only answer the basic questions.  The guys with the "light swords" are good guys.  The ones in the white suits are currently good guys too.  The droids with guns and anyone with a non-English accent is a bad guy.
The next night, while channel surfing Attack of the Clones was on Spike TV.  Aside from the CSI: marathons, TNA Wrestling and the occasionally treat of the Star Wars Saga, Spike TV's demographic is 17-40 year old d-bags and we do not watch it at all.  Like the rest of the world, Ladybug didn't particularly care of AotC all that much.  But who can blame her.  But the next night, Revenge of the Sith was on.  We tried watching that one and she took a better interest in it. She was confused when the clone army turned on the Jedi.  I had to draw her attention away during the killing of the younglings and some other parts, but she liked it so much she told her brother about it when he got home.
When she told her mother about it, her mother just rolled her eyes.
Just to rub it in, I asked KC if there was ever a time while she was watching Lifetime, when Ladybug came up to her and asked "why did that lady who is on the run from her abusive ex-husband get into a car wreck on the way to court where the guy she shunned who really likes her is there waiting for her to express his true desires for her?"
She answered "No" before I could get the whole thing out.
There really is no point or moral or conclusion to this story, other than my oldest daughter enjoys movies with Jedi Knights and not ones with Meredith Baxter Birney.
Have a great day my friends.
ladybug lifetime star wars