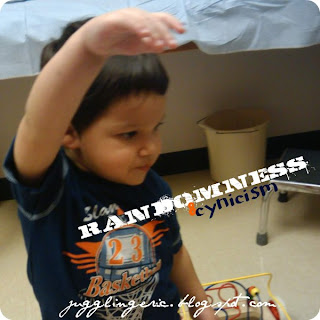 My wife enjoys Starbucks. I do as well, but pretty much because she does. Being as how I became hooked on caffeine based products, I decided to venture into making my own in the morning so I wouldn't spend 4 bucks a day on coffee. I've made my own mochas and recently delved into the world of my own frappaccinos. With the help of MaddSkillz, I think we developed a pretty good product. I made one and had KC try it.

I could see the judgment on her face.

This coming from a woman who apparently goes to Starbucks only for the independent music and baristas with cool names like "Van" and "Jade".

My Mid-Two year old son is working on his sentence structure. He's putting words together to form complete sentences more and more. There are still times where I have no clue to what he's saying. Usually KC and I ask Ladybug to translate.

So the other night at dinner, he was saying something. It could have been a number of things from what he was saying, and each guess I was wrong.

So I go to the Translator.

"Ladybug, what is your brother saying??"


I've always been self conscience about my ears. I would get teased in school and have actually contemplated having them pinned back. It doesn't help my self confidence when ear buds will not stay in my ear no matter HOW FAR I PUSH THEM IN!!!

I asked MaddSkillz to get the red thermos from the van.


"The thermos, the red thermos that holds liquid. It's yours!!"

"Oh, I know what you're talking about. I didn't know it was a thermos."

You probably noticed that I am slowly selling out this blog.  First I have the links on the upper right side that a company purchased, I'm giving away sausage, now I'm slinging Chipmunk DVD's.  I'm not blogging for the money, but if I can get money because of my blog, I'm going to do what I can.


Disco got his cast off last week. Unfortunately, he has yet to display a 97 mph fastball.

Do you have any R&C you'd like to add?
97 mph fastball Randomness and Cynicism red thermos rookie of the year starbucks toddler translator