Diary of a Mad Greek Woman 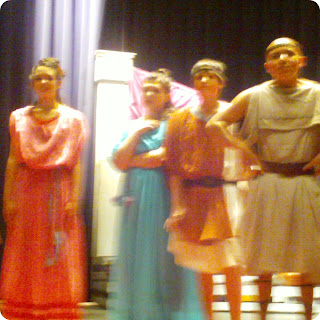 Friday night I was witness to my son's UIL One Act Play, Medea.  Now I know what you're saying, "Eric, you're son's not black."  Well you're right.  He wasn't in Tyler Perry's Madea, but the Greek tragedy Medea.

MaddSkillz played the part of "Son 1" or maybe "Son 2". Whatever "Son" he was the other "son" was actually played by a girl.

MaddSkillz would complain that he would have to cut his hair a certain way for the play.  He would also have to keep it that way if they happen to advance to higher division levels.  But after seeing his "brother" having the same haircut.  I told him I didn't want to hear it.

Medea is the story of Medea, a scorn woman in Greece.  Jason, her husband, had left her and her two sons to be with the king's daughter.  Medea get's all Madea on everyone, kills the king, his daughter, and then her own sons, just to stick it to Jason.

Ever since MaddSkillz landed his first part in a school play I've been extremely proud of him.  So sitting in the audience prior to his performance, I couldn't stop my eyes from tearing up.

The play hadn't even started yet and here I was crying like a fool.

I was glad when the lights went out because KC wouldn't have been the only one to see me in my emotional state.

He was one of only a few freshmen in the play.  At first he was upset because he was playing the part of a kid again.  He had played the part of "Little Jake" in Annie Get Your Gun earlier in the year.  But we had told him that he's only starting in high school and he has to earn the big parts in time.

His character was killed off stage and even though I wanted him too, he did not take any liberties with his death scene.  It didn't matter, I was extremely proud of him and the work he put into his part. 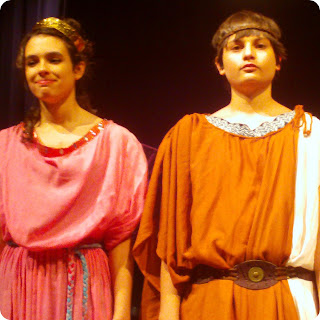 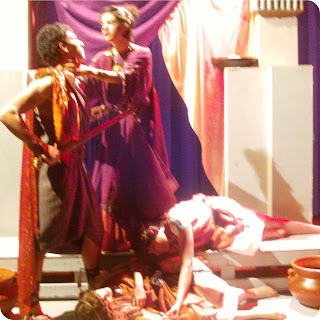