Posted by ericdbolton on November 25, 2009
Ladybug's Portfolio is where my daughter takes my cell phone and takes pictures. Usually without me knowing. The Portfolio is her better ones.
This special edition of Ladybug's Portfolio has a special guest, her little brother, Disco. So here is Disco's first post as a photographer. 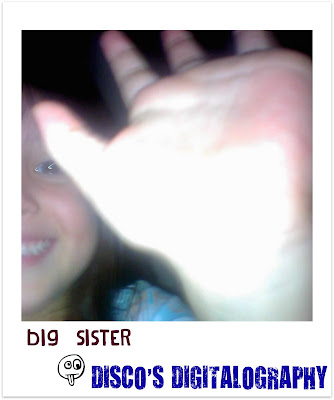 Story behind this. I had no clue that my two year old son knew how to work the camera option on my phone. Maybe it was Ladybug who showed him. he wants to do EVERYTHING his sister does. He really looks up to her. Well, we had just put up the bunk beds and the kids were enjoying their new sleeping arrangements by playing and climbing and throwing things down from the bed. Ladybug had asked to take pictures, so I obliged. I walk into the room a few minutes later and Disco has the phone and is trying to throw it to his sister who is waiting to catch it on the top bunk.
He has yet to perfect his pitching arm and a late release had him throwing it very hard... INTO THE WALL!!!! This is the part where I walked in. Just in time to see the phone that is already falling apart having a nice little meeting with dry wall. Phone's fine. No one got yelled at. Ladybug knew it wasn't right what they were doing and apologized right away.
So, like many pilot TV shows that don't get picked up. Disco's Digitalography will more than likely not be picked up for a season run anytime soon. Maybe the demand for it will be so high that I'll be stupid not to bring it back into a cush time slot.
Have a great day my friends...
cell phone pictures discos digitalography Ladybug Photo Portfolio