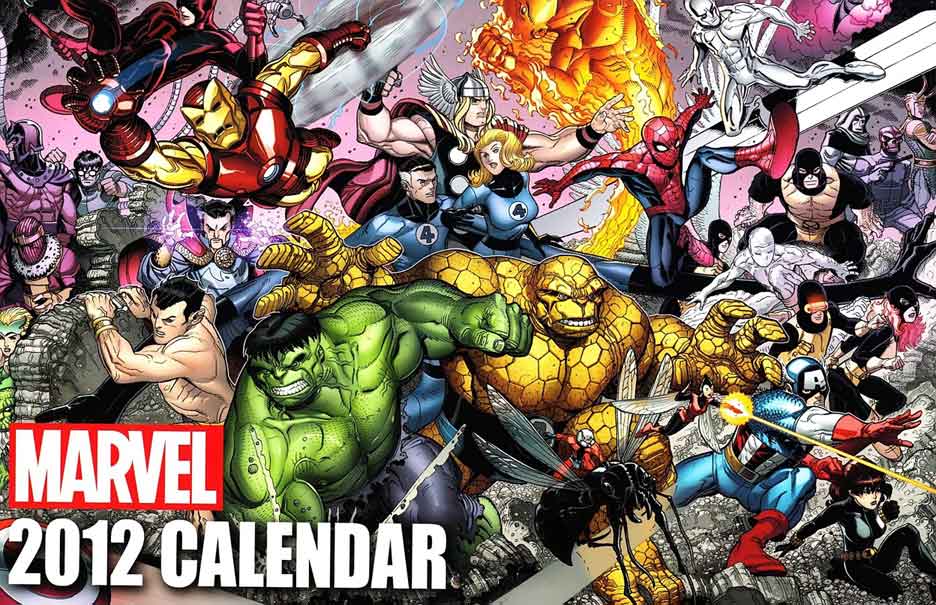 I'm a comic book geek. Well, I was until I had to stop collecting about 11 years ago. It was either the current newest chromium cover one shot or rent. I've tried to sneak a peek every now and then at the new issues, but I have no clue what's going on. There's no way for me to catch up now. So I have to get my comic fix through the movies and my old books. Two years ago, I got a a Marvel Super Heroes Wall Calendar from my Secret Santa at work. Every month I waited in anticipation for the next month to bask in the splash page that will shine down on me from my desk every day.

It was about in March when I realized that these group photos of all the heroes make no sense.

Sure you have to escape belief when it comes to people with super powers, aliens living among us that are not named Tom Cruise, and no reports of collateral damage from any of the battles.

But most of the pictures have a handful or ALL the heroes running, flying, skipping, swinging, hopping or bouncing forwards in the picture. Ok let me show some examples I found.

Apparently all of our heroes are attacking someone that is down the hallway. Maybe they trapped Magneto in his study and they felt breaking into his house and cramming down the hallway was the best defense. Lookit poor Gambit, he was pissed because he had three and a half minutes of screen time in Wolverine, now he's rank and file between Spider-Man's butt and Iron Man's alcoholism. WTH is Elektra doing here? I think that they just wanted the gratuitous T&A upfront. But then they forgot that this isn't 1996 and they aren't drawn by Rob Liefeld. And apparently The Thing wants first dibs at Magneto and smoking jacket.

Ahh.. The panoramic of EVERY character in the Marvel Universe. Can you imagine how much crime is being committed right now since all the heroes are here at the photo op. On the other end, imagine how much crime is NOT being committed because all the villains are in the same place. It's good to know that the world is being protected by Jarvis and Aunt May. But it's a great opportunity for the 16th tier villains such as Kite King and Humbug.

I wonder if the photographer is getting paid big bucks for this. I bet Peter Parker is PISSED!! Does Mr. Fantastic need to have some body part stretching at all times? Do we really need to know that you can stretch? Wolverine is either in front because he's in every Marvel comic book or because he is the shortest. I also question if Nightcrawler BAMF'D his way to the front. Does Domino really need to have a weapon drawn? I wonder if she's thinking of Cable. Meanwhile in the back, Speedball wishes for his own series again from 1986.

Ok.. Here's an attack formation I was talking about. All the heroes are doing a frontal attack. Now, I failed out of Superhero Strategery School, but the time there I knew that you wouldn't have all your guys attack from the front. Who was the teacher in this school? George Washington?!?! Are the heroes like the Revolutionary Army and they're attacking the Redcoats??


Then I thought, Spider-Man usually works solo. Why is he always leading these charges??

Spider-Man: Ok guys.. My movies have made the most money.. I'll go in front…

Captain America: But you have no leadership experience..
Spider-Man: Yeah, but at least I'm not rumored to be played by Will Smith.

Then I think, why the heck is Dr Strange involved in this battle? And what powerful enemy are they attacking that require the level of power we see here? Onslaught? The Skrulls?? Galactus?? Health Care Reform?

This Post Has Been Edited Since It's Original Posting in 2008.